I’ve had cats most of my life. The first one I remember was white and maybe his name was Snowball. I think he happened because my mom decided when my parents divorced it was Ok for us to have cats. My father had allergies.

Somewhere along the way came Mikey and Sparky. Mikey was a dark grey, furry tiger cat and named after my Uncle Mike. I wish I could remember why. Sparky was furry too and he was black and white kind of like a dairy cow.

I remember a time when my brother freaked out after school. We had a tornado warning and it was time to get in the bathroom of our ranch house and he couldn’t get Mikey to come in.

After I was out of college and moved to my second apartment, I found a unique situation. I hadn’t lived with any meows for some time. I went to see an older apartment and the owners said that the girl living there was going to teach English in Spain and didn’t know what to do with her cat. He was big boy, orange and short hair. I fell in love with that guy. I said, if I move in, could I keep him? The cute little Italian couple that were my landlords said Ok. His name was Chubby Chase. He’s the first meow I ever knew would chase a laser up a wall. It also took time when he switched owners for him to come out of hiding in the clothes closet.

Chubby moved with me to the next place and in with my roommate and her cat Pete. This is also when I discovered Chubby could eat plants. Beth wasn’t so happy with that one. He even licked Tabasco sauce off of leaves! Didn’t even faze that guy. Chubby eventually passed away from fatty liver disease. That’s when I started paying much more attention to cat health. The vet said he was likely ill when I inherited him but I still think to this day what if he had diet cat food? Chubby was also the cat that I didn’t know could jump on the counter and eat a loaf of bread.

When Chubby passed, I didn’t last very long with not getting another cat. I picked out a black and white tuxedo kitten I named Buster. Buster was at a local shelter and named Stevie before we changed it. Buster earned the nickname ‘Bathroom Butler’ because he liked to sit on the vanity when I was in the restroom or anyone else who would let him in. Buster was one of the most independent and not a snuggle cat even though I’ve always made my cats let me pick them up.

Buster eventually turned into a ‘Pee Cat’. Unfortunately, I have a lot of personal experience on this topic in particular. His pee issue started even before the next cat came into my life. After much thought and painful decision, I decided I could live with donating Buster to a program at The Ohio State University called the Indoor Cat Initiative that studies this behavioral issue. I realize some people will not agree with me on the decision but I felt at least Buster served a bigger purpose in life to help figure out why the Pee Cat syndrome happens.

Before Buster passed, he didn’t know what happened when Rascal came onto the scene. I think my coworker knew I was the perfect victim. She rescued a pregnant cat and I went home with her one day at lunchtime to see the new kittens. Even before their eyes opened. Rascal was the only orange and white one. Rascal earned his grumpy, non-friendly reputation. My brother nicknamed him Beelzebub or Beezle for short. Buster and Rascal were the cats I had when I met Greg. It took quite some time before Rascal even warmed up to Greg. I knew I was in trouble when kitten Rascal would launch and hang off the side of my plaid fabric couch.

When Greg and I moved in together, Rascal became brothers with Greg’s cat Captain. It took some time before the word ‘brothers’ really applied. They ended up sleeping near each other and even grooming. Well, mostly Rascal would groom Captain.

When I started dating Greg, we commuted long distance to see each other. I made friends with Captain right away. I think Captain knew I am a cat lover. Captain was another big, short hair orange tiger cat. I knew there was something very special about Greg when we both loved cats so much. And especially orange ones. Captain did not survive a tumor that wasn’t detected until it was too late.

Captain passed and we picked Felix at our local county animal shelter where I sometimes volunteer. I remember calling Greg and saying hey maybe you should come down here because they have more than one orange one. We were able to bring Felix home that night because he was already neutered.

Greg named him after a James Bond character. Guess what color Felix is? Orange short hair tiger cat. Felix was a new brother for Rascal. That took some time for them to adjust too.   At one point, our vet suggested Felix go on a diet. Oh boy, what did that mean? Special diet cat food? I will write another post on my thoughts of feeding two cats’ two different cat foods at the same time.

Rascal lived 17 long years and at the end of his life we battled kidney issues with him. I will write other posts about our adventures in the world of owning a cat with kidney issues. Rascal passed away a little over a year ago and we still miss him very much.

Rascal passed in January and by February we adopted Teddy from a shelter a couple of counties away from where we now live. I kept searching online and saw his picture on a Saturday. Greg said let’s go get him even though the winter weather was nasty that day.   Teddy is a big hairy (we think) Maine Coon mix of a cat. Our Vet guessed he was 3. Teddy is the first cat either of us experienced that did not make a single meow sound in the pet taxi on the way home. Not a peep. I named Teddy because he felt like a big Teddy Bear when I picked him up. Teddy is orange and white too! I think he is the hairiest cat I’ve ever owned.

Teddy is more of our window cat than Felix. They both talk to the birds. They do fairly well together although they have their moments with running like a herd of horses through our house. Sometimes I am not sure if it’s play fighting or mean fighting. Teddy can bamboozle Felix and not play very nice. We think some of this may have to do with Teddy being younger and Felix starting to be a Senior cat.

We are also starting to learn and study more on cat biting as Teddy sometimes will nip at you when he’s not fond of how you are holding him or we think too when he’s bored and wants food or attention. Teddy is known for being a bed hog. He stretches out very long along your body and then you can’t move. Sort of like Stretch Armstrong for those who remember the toy doll. He has earned the nickname Teddy Squatch because of his size. We think he also doesn’t nap as much as our other cats. Teddy is also one of the most vocal cats we’ve ever had and comes with a variety of tunes. As I am writing this fun history of my meows, they are sitting next to each other watching birds on the perfectly placed bird feeder outside of my office window. I am not sure if the feeder is there for me or more for them. They are also perched on the old end table that is the perfect height to the window for the cats.

This is the table also known as the ‘Kitty Bunk Bed’. The bottom level serves as another cat nap spot. It just so happens to be located near the heating vent in the floor. If I ever rearrange my home office space, that spot is permanently reserved.

Ready to Find Your Niche?
"I'd Love to Learn About..."
Categories
Want Keyword Research Training
From Spencer? 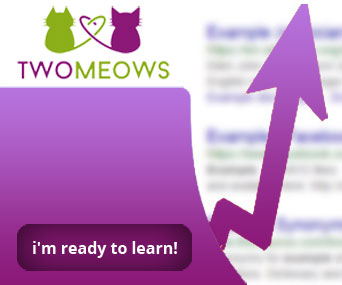 Grab the Tools I Use For…